HCL Sametime Meeting 11.5, registrations for the preview are opened

HCL is pushing hard also on HCL Sametime , now out with 11 FP1 release .

Sametime is a secure on-prem solution, for Instant messaging and awareness now composed of 2 components, a community server and a proxy server for web connections.

The webclient was totally renewed in this version and also the architecture has changed with Tomcat and MongoDB instead of WebSphere and db2.

The next Sametime component of the roadmap is now the Meeting that will be available with version  11.5 targeted for June 2020. 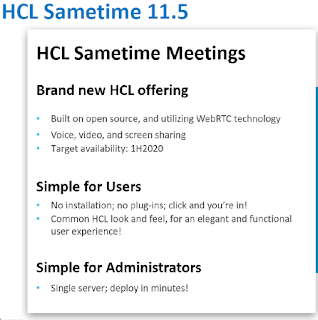 Yesterday HCL has opened a registration form to access a preview version hosted by HCL , so partner and customers will be able to try this solution and evaluate the feature. During the last ICON CH I had the pleasure to try the meeting in advance and I was well impressed.

The meeting should be released initially as a docker image for an easy and fast implementation and eventually later as a classic setup.
Posted by Matteo Bisi at 4:19 PM